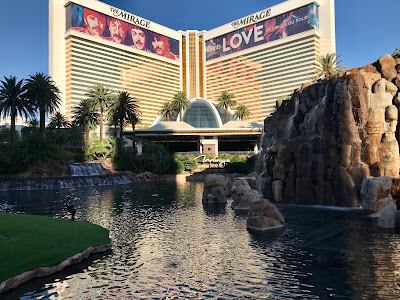 After leaving Las Vegas and moving on to the next leg of our sabbatical, I jotted down some thoughts. First, let me say there is a lot of good fun to be had here. I had a blast! The restaurants, shops, tours and weather are topnotch. Many people call "The Meadows" home and raise a family here. But in this reflection, I want to dwell on the doctrine of sin.

Las Vegas embraces its sin. It is nicknamed “Sin City“ for a reason. Prostitution is legal in parts of Nevada (though officially, not in Las Vegas). Their slogan (I think they’ve changed it now) was “What happens in Vegas stays in Vegas,” suggesting to visitors they should go a little wild while on vacation. Even Forbes published an article, Why Las Vegas is Still America’s Most Sinful City.

But consider: sin is not any worse here, it is just more evident. What is veiled in other places around the world is brought out into the open on The Strip. And when something is out in the open, it can be more clearly examined.

In the evenings, sex is for sale in Vegas. It is ripped away from its natural place of committed love. It is used to lure people into casinos with scantily clad (surprisingly young) girls. One evening, while waiting for the elevator in our upscale hotel, I could overhear a group of boys (it would be inappropriate to call them men) talking in the most vulgar chatter I have heard. What they hoped to do to a Vietnamese prostitute I will not repeat here. At least one of them, perhaps a little more sober than the others, had the sense to admonish another to “calm down.” On the street, one ad for a topless girl read, "Just turned 18."

The mornings reveal a very different Vegas. While going for an early morning walk looking for a cup of coffee, most places were closed. I guess Vegas is not a morning city; it took about a two-mile stroll before I found an open Starbucks. What I did see were drunk people, human beings made in the image of God, sleeping on the hard concrete sidewalks with cans and bottles nearby. I saw sawdust spread out from the previous night (covering vomit?). I witnessed lonely people sitting at open casinos playing the slots, hoping against hope. Hedonism's victims. There is a reason why pagan, as opposed to Judeo-Christian imagery is scattered throughout the city. Any reminder of Christian ethics would be bad for business.

I am not writing this to be judgmental, or even a killjoy, but to make a point. People come to Las Vegas to openly sin (among other reasons, of course). This sin is not manufactured here, it already exists in the human heart. People carry their sinful hearts to Vegas, and Vegas gives it a playground. Sin is not in "a city," or anywhere exterior to us; it is inside each of us. Indeed, it is in my heart. This is what the doctrine of sin has always taught in the Christian faith.

Not all that far from Las Vegas is the desert. Even the majestic Grand Canyon is only a few hours drive. In the desert, we find stunning natural beauty. It is not the beauty of the forest or the ocean, which are filled with life. Instead, it is the beauty of silence, stillness, quiet; the opposite of LV's bustle and activity. It is the kind of place Jesus went to pray; the place God used to mold Israel as his chosen people. The desert fathers believed they could meet with God more clearly there. Perhaps this juxtaposition is a parable for us. God is near. Not only near Sin City but our hearts. This is a both a warning and a comfort.

The Lord is near. What happens in Vegas will not stay in Vegas. What happens here, or anywhere else, will be laid bare before an all holy God. There will be a reckoning for our lives. Every hidden sin will be revealed. Every...hidden...sin. We are in need of a heart transformation which only comes by grace through faith in Jesus Christ.

He is near. He is near to redeem our broken and sinful hearts. He is near to transform us into new men and women. Scattered among the city lights are a handful of billboards that say things like, “Hope in Jesus.” I attended a church service in the city before I left and was brought to tears during the worship, singing, "The King is alive!" Jesus is not excluded from Sin City, or Haverhill, MA, or your town. He is not excluded from your heart.