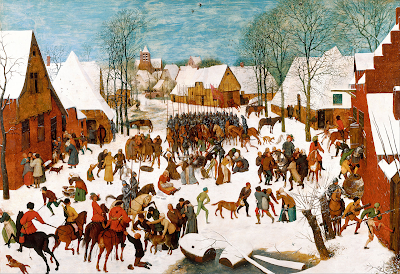 Like the first Christmas story, Christmas today is permeated with hurt, even as it is brimming with happiness. It’s filled with weeping while also being saturated with rejoicing.

It’s the hap-happiest time of the year! Christmas ‘tis the season to be jolly. We cheerfully wish one another a Merry Christmas and sing together Joy to the World. Every Hallmark movie, Christmas special and Santa song reminds us of this. Many understandably look forward to this time all year round!

Yet, at the same time, all things considered, it is also the most difficult time of the year. For many, the Christmas season is filled with loneliness, depression and even grief. It is literally the darkest time of the year. The shortest day of the year in the northern hemisphere falls on one of four days:  December 20, 21, 22 or 23. Because of this, the Christmas season is the time of year when Seasonal Affective Disorder (SAD) begins to take effect.

It is the deadliest time of the year. Christopher Ingraham in The Washington Post comments: “You get a sort of wave of death that ebbs in the late summer months, rises sharply through December, and hits a peak exactly on Jan. 1 before subsiding more gradually through the beginning of the year. The general contours of this wave are well known.” Indeed, “there are more emergency department deaths on Christmas, the day after Christmas, and New Year’s Day than on any other day of the year.” It is cold, dark and dangerous.

It should be no surprise then that the original Christmas story contains elements of both tragedy and triumph. It is permeated with hurt. After Joseph was warned in a dream, he took the holy family to Egypt as immigrant refugees. There was a significant Israeli expat population in Egypt, so it provided a safe place to flee from Herod the Great’s cruelty. Coptic Christians today celebrate the infant Jesus’ short stay in Egypt. The relationship between Egypt and Israel was a sordid one. Israel, historically dwarfed by the size and power of their southern neighbor, also had a memory of enslavement by the Egyptians, one that Israel reminded itself of in song and story. The Exodus is recalled, and later applied to Jesus, in Hosea 11:1, “Out of Egypt I have called my son.”

The reason for this flight to Egypt was Herod’s fanaticism searching furiously for the would-be infant king of the Jews. In his rage, he orders the death of all male children two years old and under in the Bethlehem region. This oftentimes neglected part of the Christmas story (in fairness, it occurred up to two years after the actual birth) has been called the Massacre of the Innocents. The reality that there is no written record of this event outside of Holy Scripture doesn’t surprise us. Bethlehem was a town of only about 1,000 residents, and it is estimated that there would have been about twenty male children under two. This type of murderous paranoia fits Herod’s character, a man who also killed his wife and three of his sons.

A beautiful piece of music was written to commemorate these slain babies called the Coventry Carol, written in the 16th century as if by a mother singing a lullaby to her slain son: “By-by, lullay, lullay / Herod the King / in his raging / charged he hath this day / his men of might / in his own sight / all children young to slay / then woe is me / poor child for thee / and ever mourn and say / for thy parting / nor say nor sing / by-by, lullay, lullay / lullay, lullay / my little tiny child."

These tragic events of the first Christmas story bring out the brokenness of our world; a world that God doesn’t ignore, pretend does not exist or turn a blind eye to. This is the ugly, hurting, suffering, dark world he came to save. There is a side of Christmas we sometimes forget: the harsh context Jesus entered into, a world that would end with him on a Roman cross (and a resurrection).

Still today, Christmas is not easy for everyone. We would be Christ-like to empathize and pray for others. There are those who are grieving. When you’ve lost someone you love, the absence, that hole in the chest, is felt more distinctly around Christmas than at other times of the year. There are those who are financially struggling. While many American Christmases are filled with food, gifts and decorations, others are marred by feelings of inferiority due to a lack of resources.

Those who are in feuds or conflicts with friends and family, those who are suffering quietly with chronic pain, those who are lonely or depressed are not on the outskirts of Christmas; they are part of the very brokenness Jesus entered our world to redeem.

I did an online survey. It posed a seemingly straightforward question: “Is Christmas a happy time of the year for you? You can be honest.” The two options were “1. Yes, I love Christmas!” “2. No, Christmas is a difficult time.” Out of the 70 responses (granted a small sampling), 11 responded with number 2. Others commented insightful reflections. A woman who lost all three of her children, her adult son fairly recently wrote:

“I love Christmas but it is such a sad time for me. I watch everyone with their families and I am so happy for them truly, but when everyone goes home on Christmas Eve my heart is broken just wanting my children back. But I have to be thankful for my family that comes Christmas Eve, because while they are here it brings me some peace and happiness. The holidays are tough I know for so many people. I also know there are people worse off than me, so I get upset with myself for getting depressed or crying. I can hide all of that from everyone because family is so very important to me. I wouldn’t want them to worry or feel bad for me, but I love to see everyone happy and enjoying themselves because that’s what Christmas is about: happiness and peace on the birthday of Jesus.”

Another who lost her young husband wrote:

“Christmas used to be my favorite time of year. Since [my husband’s] passing I want it to be over before it begins. I feel forced to tolerate it for the sake of everyone else...like a sacrifice. But that was, after all, the fate of Jesus, right?”

Others wrote they enjoyed Christmas themselves, but felt empathy towards those who can’t. One man wrote: “For me personally, yes, but having spent my entire life working in the helping profession, first in a children's home and now in a nursing home, the holidays are not the happiest for all.”

For those who are grieving, hurting, lonely or wanting, Christmas is for you. Might I even suggest that Christmas is for you most of all. It is a time we see Jesus Christ, whose conception was surrounded by suspicion, with no place in the inn for his birth, who spent his earliest years as a homeless refugee escaping the clutches of a tyrant out to kill him. He came to rescue you, and fix a world broken by sin.

Christmas is a joyful time, too. No lengthy argument needs to be made for this. We would all do well to count our blessings. But also to consider that our gifts and goods, feasts and festivals, even our families and friends, are all passing blessings. Beyond this is a Savior who calls us to himself and his sacrifice, to true and eternal hope of life with Him.

Picture: Peter the Elder, 16th Century "Massacre of the Innocents"