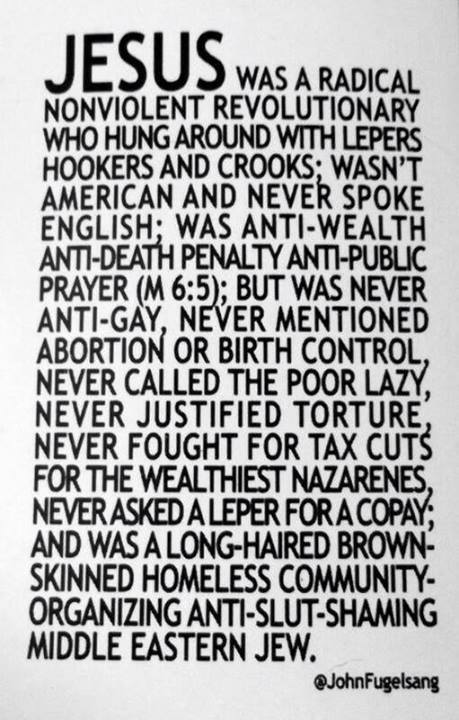 Perhaps you’ve seen this statement floating around the internet. Maybe you’ve read it on Facebook or a blog, or someone showed it to you. It is interesting, succinct and engaging. It is also almost entirely inaccurate. Let’s break it down.

“Jesus was a radical nonviolent revolutionary who hung around with lepers, hookers and crooks; wasn’t American and never spoke English;”
Okay, I could be nitpicky, but this line is basically true.

“was anti-wealth,”
Nowhere does it describe Jesus as anti-wealth. In fact, he often spoke of money and the need to use it well for the kingdom, but never condemned wealth. He certainly opposed treating money as an idol. He himself received gold at his birth and was financially supported by a number of wealthy women in particular (Luke 8:1-3).

“anti-death penalty,”
Nope. Jesus spoke about personal non-retaliation in the Sermon on the Mount, or against hypocritical and vigilante justice concerning the woman who was to be stoned for adultery, neither of which oppose the death penalty imposed by the State. The insurrectionist on the cross next to Jesus said, “We are punished justly, but this man has done nothing wrong.” Jesus doesn’t correct him, but offers him grace. Jesus affirms the authority of the Old Testament which allows for capital punishment.

“and even anti-public prayer (Matthew 6:5);”
Sorry, Matthew 6 is not a blanket prohibition against public prayer, but is contextually prohibiting showing off when we pray. Jesus himself prayed in public, and he calls his people to pray together, “Our Father, who art in heaven.”

“but was never anti-gay,”
It is true that Jesus is not anti-anyone. However, he does define marriage in a discussion with the Pharisees on divorce: ““Have you not read that he who created them from the beginning made them male and female, and said, ‘Therefore a man shall leave his father and his mother and hold fast to his wife, and the two shall become one flesh’? So they are no longer two but one flesh. What therefore God has joined together, let not man separate” (Matt 19:4-6).

“never mentioned abortion or birth control,”
Why would he mention abortion? It was already understood to be murder in his context. Jesus condemns murder and that should be enough to cover abortion. Birth control is not a sin, so there is no need for him to condemn it.

“never called the poor lazy, never justified torture, never fought for tax cuts for the wealthiest Nazarenes, never asked a leper for a copay;”
Reading modern issues into a first-century figure is just plain silly. Jesus never spoke about the internet, smart phones or satellites either. Looking at his teaching, he commends work “Jesus answered them, ‘My Father is working until now, and I am working’” (John 5:17). Turn it around and it is also true, “Jesus never called the rich lazy, never condemned torture, never fought for tax increases for the wealthiest Nazarenes, never said we shouldn’t ask for a copay for healthcare.”

“anti-slut-shaming Middle Eastern Jew.”
First, Jesus would probably not use the derogatory term “slut” or “slut-shaming.” I think he would see that as demeaning and unnecessary. Second, his focus was not on being anti-anyone, but was on proclaiming grace to all sinners, including the sexually immoral.