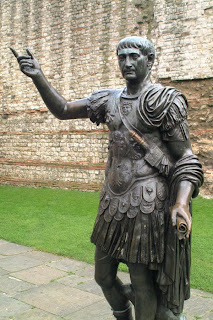 According to St. Basil, the early church father, under the persecutions of the emperor Licinius, there were forty Roman soldiers who became Christians.  They were commanded to renounce Christ.  They refused and were condemned by the prefect to be exposed naked upon a frozen pond near Sebaste on a bitterly cold night in hopes that they would reject Christ.  Nearby a hot bath was set up so that if they simply reject Christ, they could get warm and survive.  The men supposedly chanted, “Here die 40 men for Christ.  Here die 40 men for Christ.”

One of the guards set to keep watch over the soldiers watched in astonishment as these men were willing to give it all in order to be faithful to Christ.  Their unity, their faithfulness, their bond together, must have seemed like nothing he had ever seen in this world.  Among the 40 soldiers, one yielded and went to the warm baths.  The soldiers began to chant instead, “Here die 39 men for Christ."  The guard who watched threw off his clothes and walked out to the 39 soldiers.  He began to chant with them again “Here die 40 men for Christ.  Here die 40 men Christ.”  By the following day every one of them was dead.