A Short Stop in Princeton University 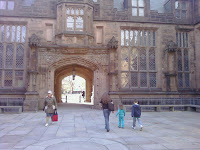 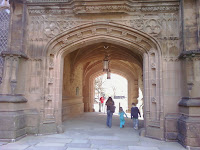 On our way to VA, we stopped off in Princeton, NJ and got a chance to walk around the University for awhile. Actually it was incidental, I was sleeping as Jess drove for awhile.  When I woke up we were in downtown Princeton, and we had to stop and take a look around.

Out of our country's earliest major universities (Harvard, Yale, and Princeton), Princeton was the last to go liberal. Men like Jonathan Edwards, Charles Hodge, B B Warfield, and Machen held off the tide of Enlightenment philosophy against Biblical authority for an extra few generations. 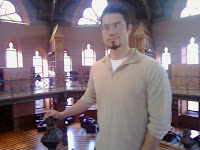 I have to say the architecture at Princeton was absolutely stunning! Far exceeding anything I've seen at Harvard (haven't been to Yale yet). Jess and I's first impression walking around campus was that there were two types of students there: rich privileged kids enjoying themselves and scholarship kids scared to death of failing!

Though I think it is probably too late to hope that Princeton Theological Seminary will ever return to Biblical authority, it was a beautiful reminder of the history this University has played not only in this country but in the Christian church of a past day and time.