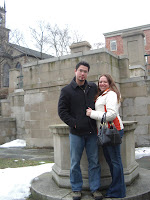 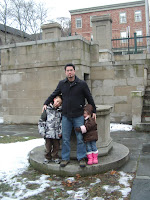 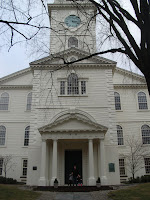 More historic New England day trips. Recently we took a family trip to Providence, RI. What a clean, historic, and beautiful town. It was yet another New England gem that I never visited (at least that I can remember) until now. The kids loved it, although as you can see Isaac is not a big fan of taking pictures.

Providence was founded by Roger Williams, an early Baptist minister who founded the town based on religious freedom in the early part of the 17th century. The first two pictures are at the Roger Williams memorial, the second two at the First Baptist Church in America (the oldest Baptist church in America, that as far as I know has sadly gone liberal). We also took a trip over to Brown University and walked through their bookstore...and fed my insatiable love for books.

What an important reminder that the gospel can never be forced upon people. The gospel must be received, personally and willfully by the individual, as God first works in us. As much as I love Calvin, Luther, and Edwards, I am unashamedly a Baptist. Individual conversion, based on the conscious reception of the will (again, as God first works within us), leaves the State or Government powerless to produce regeneration. Paradoxically, because I believe Jesus is the only way to be saved, I would therefore fully support an individual's freedom to unbelief. In the end, it is God who must do the work on their soul.