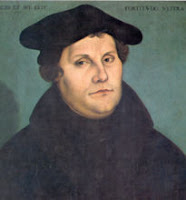 In a so called unprecedented age, where all of Christianity is re-inventing itself, and all of Christian doctrine is up for re-writing, one must ask the question "Does church history matter?" (Just to write this almost makes me cringe at how unbelievably near-sighted my generation has become!)
If we say 'yes it matters' too emphatically, the response will be "Why are you Protestants then?" Didn't Luther radically depart from centuries of theological teaching. One common criticism against Luther (and the Reformation) was "Can you alone be right and the whole world be wrong?" And, when Luther talks about Sola Scriptura, isn't he saying Scripture is all that matters?
A few things about Luther. First, his Sola Scriptura argument was not that Scripture is the only authority for the church, but that Scripture alone is the final authority for the church. According to Luther, there can be, indeed should be, lesser authorities, including pastors, doctors, and theologians of the past. Also, Luther himself was not a "My Bible and me" would-be-theologian. He was extremely well-versed in both Scripture (in which he earned a doctorate) AND church history. Luther did not see himself as departing from all of church history, but that part which strayed from Biblical faith. He would often use church history to defend his arguments, as did Calvin and all those who followed. Calvin himself was so well versed in Augustine that he would quote lengthy sections from his works from memory.
Now, having said that, here is the value of church history. I am one person. I read my Bible and come to certain conclusions based on what I know of the historical and textual context. You (my reader) are another person who does the same. For us to converse with each other may help us to see blindspots in each others thinking. What if we could multiply that by, say...a few million others throughout all generations of Christian history from every diverse background. Also, when I read the Bible, I find it helpful to consult an expert every so often, like a mature Christian friend or pastor. What if I could hear what theologians, philosophers, monks, pastors, and scholars have said about something for say...two thousand years? It is possible that we will discover something totally new, something that all of church history was wrong about, and we alone have discovered. It is possible, but not probable.
Church history is not authoritative in that it can tell us contrary to what Scripture tells us (in such case Scripture always wins), but it is authoritative in that it tells us what men and women (far more smart, far more faithful, and far more godly than I!) have thought of Scripture from generation to generation. Many of whom lost their lives because of their belief in it.
So, maybe instead of re-writing all of our Christian doctrine in this unprecedented age of reinventing the church (again cringing), we should humbly dialogue with the few million friends who went before and see if they have something to offer?

Anonymous said…
But how does one "dialogue" with someone who's already dead? It seems as though they get an audience for their view, but we don't get one for ours. This seems more like a monologue.

Also, you say yourself that "Scripture always wins." Who decides who's right on Scriptural interpretation?

Lastly, it must be noted that this "unprecedented age" of which you speak is the first millennium ever that allows us to re-examine cardinal doctrines without the fear of death. Are the prior years really the golden years?
March 26, 2008 at 7:43 PM

1) "How do we dialogue with the dead?" - I would certainly have to agree the conversation can be a bit morose! However, we dialogue with the dead by hearing what they have to say, reading carefully and thorougly, then asking questions. You ever find yourself yelling at a book "How can you say that!", "What in the world do you mean by that?" And we read on to search for answers. GK Chesterton talks about the democracy of the dead.

2) "Who decides whose right on Scriptural interpretation?" - I respect the question, but I must say respectfully that this has got to be one of the most over-exaggerated, bloated, issues of postmodernism. We simply CAN understand texts. Meaning is not up for grabs for every reader. Through careful reading and understanding the setting, we can come to a fairly certain grasp of what a text means. Just like I can understand an email from a friend, a letter from the government, or an article in the newspaper, so we can understand ancient texts as well. There are difficulties, but they have been grossly exaggerated.

As Aristotle said, "If you would understand anything, observe its beginning and its development."
March 26, 2008 at 9:14 PM

Anonymous said…
Anything that gets in the way of Christians hearing exactly what God is saying in any given moment is of no value. Christians have been killing Christianity since the beginning. Look left, look right, think about the past think about the potential future but make sure no one sits and listens to the voice of God. If they do they might find out that they themselves are high priests and then the whole commercial / political structure of the so called (c)hurch would really crumble. Calvin who?????
April 29, 2008 at 10:19 PM

Anonymous said…
As much as I love and respect the author of the last post, for the sake of clarity, I have to strongly disagree with his comment. Please, don't take it personal.

The argument is so self-defeating it hardly needs a response. But here goes.

The comment is based on hearing God's voice: Instead of caring about church history we should just submit to God's voice. That is like a husband saying to his wife, "Instead of thinking about our wedding, the first 20 years of marriage, our kids, tough times and good times, struggles and blessings, going through your cancer, going through my unemployment, etc. instead of thinking about that, let's just get to know each other." Perhaps the 2,000 years of God working in his church HELPS us know and hear him? But moving on, the question is then:

How do Christians 'hear exactly what God is saying'?

1) "Subjective feeling. Experience. The community voice." Even just the most minute grasp of church history will tell you where that has lead unchecked. To paraphrase Karl Barth, we don't hear God's voice no matter how loud we shout about our experience. Where does God say, "what you feel and sense about me, is my clearest voice to you"?

2) "I just need to read my Bible." Left to whose interpretation? Yours? Mine? This just becomes the same thing as #1, with the thin veil of the preface "But Scripture means to me..." Yes we can know what Scripture says, but not in a vacuum.

3) "Reason guiding us through Scripture." Sounds great, but is our individual reasoning enough on it's own? Are we really naive enough to think we can approach Scripture with no bias, no presuppositions, no blindspots, and perfect reasoning?

What then is a right way to hear the voice of God? By being lead with a humble orthodoxy. We come to God in prayer, guided by the authoritative Scriptures, with the guidance of the church. Perhaps that sounds crazy, but it is what Christians have been doing since...Christ.

As far as the rest of the comment, I don't share that pessimism towards the church. Believe it or not, I actually love the church. Deeply. I think we are all sinners who are slipping and sliding all over the place. Nevertheless the church is the place where God's Spirit dwells, the pillar and stronghold of truth, those entrusted with the gospel, and that which the gates of Hades will never prevail.

Anonymous said…
I love you also. You and I both know "Christians" who essentially live as though Calvin and Luther were walking along the sea of Galilee hand in hand with the Lord and that their writings should be canonized. In my own life becoming "of Calvin" or "of Luther" was born out elitism and wanting to be a technician rather than a Child of God. My point was that when a person overdoses on this stuff it leads to a skewed and arrogant perspective.

The argument was "Anything that gets in the way of Christians hearing exactly what God is saying in any given moment is of no value." It is air tight and you have not dented it. If you read this argument as "church history and the reformers should be avoided at all cost" Then you have miss-interpreted what I said.